In this rapidly evolving talent landscape, organizations that don't keep pace with innovation will fall behind the competition, finding it increasingly difficult to recruit, engage, and retain top employees.

With so many aspects of an organization that require attention, you may be wondering why traditional performance management practices are an immediate concern. It boils down to this:

The subjectivity of traditional performance reviews can be masked by a formal process and quantified measures. Yet even the rating scale itself is prone to bias:

Inaccurate performance data impairs employment decision-making and breeds mistrust from employees seeking honest feedback and transparency. This is exacerbated by arbitrary or counterproductive ranking that impedes collaboration and innovation.

As a result, the whole process can feel like a waste of time for manager and employee alike, even though both would benefit from developing the employee’s overall mastery and autonomy.

Redesigning performance management has directly increased employee engagement for 90 percent of companies. When employees believe their organization effectively assesses individual performance, they are six times more likely to be engaged.

Two years after Gap increased the frequency of performance discussions and moved from annual to quarterly goals, it achieved record completion of store-level goals. Two years after Patagonia adopted the Objectives and Key Results (OKR) methodology, both individual and financial performance improved.

Those who don't adapt will fall behind.

If they don’t outright dread them, supervisors and subordinates are irritated by traditional performance appraisals. Those same appraisals even drive a quarter of men to tears.

Rating or ranking people triggers “fight or flight” responses that impede their ability to engage in rational and reflective conversation. Because of the pressure and expectations associated with annual reviews, they tend to de-motivate employees and drive them to disengage.

If your organization is not satisfying the needs of the modern workforce, employees at all levels will be:

Traditional or not, performance management is costly.

Corporate Executive Board calculates the average manager spends over 200 hours on performance reviews every year, which adds up to about $3,500 per employee.

By understanding and working to fulfill the needs and expectations of today's workforce, modern performance management strategies can improve the return on this investment.

In the next chapter we're going to explore the expectations of modern employees in detail, and identify how different performance management strategies either satisfy, or fail to meet those expectations.

79 percent of executives rate redesigning their organization's performance management strategy as a high priority. That represents an increase of eight percent over the past three years. 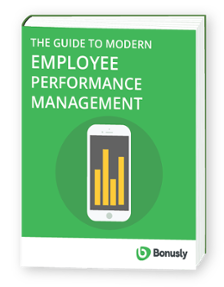